I am open for concert booking abroad either with my own group(s) or as a soloist with local bands.

I can be contacted at christinadahlmusic@gmail.com or Denise Thigpen 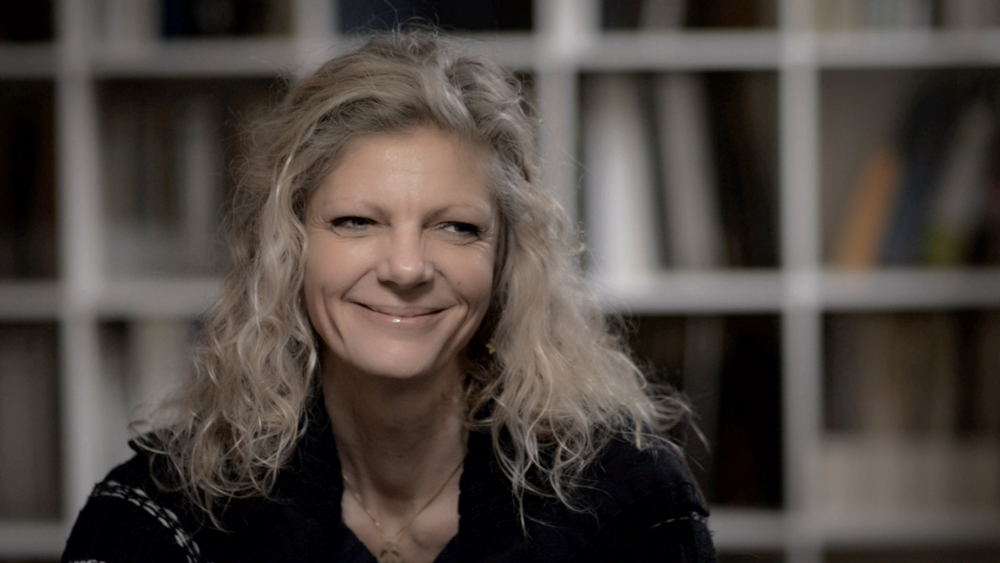 To me music is love. Love is unconditional. I can choose to receive the music and let it flow through me like a wave of warm energy. I can express myself freely.

I can let myself be caught, taken by the music. I can consciously and unconsciously find an embrace of all my feelings in the music – joy, anger, sorrow, longing, fear and so much more.

My love for music began in my childhood.

At the local music school it was possible for me to share my joy of music with other children. It was through Mozart’s Clarinet Concerto that I for the first time experienced The Musical Moment where everything comes together – a sense of eternity that was always there but now for the first time resonated within me and made sense in a deeply profound way.

Later in life I was lucky to experience that moment again. It was during a workshop with the American group Quest with among others Dave Liebman. It was a huge revelation for me. Through their music they opened the door to en endless room with all the colors of the world. They ignited a spark within me to follow my longings and love for music,

During my musicology studies at the University of Copenhagen and at the Conservatory of Rythmic Music I began to compose music for smaller and larger ensembles. During the 90ties I started composing for my own jazz quintet. I had my debut concert at the Jazzhouse Montmartre in the beginning of the 90ties.

It was during my studies that I made my first aquintence with the instrumentation of the classical music when I at the request of Erik Moseholm composed a work for the Danish Radio Concert Orchestra in 1994 where I was the soloist. I later had the opportunity to compose for the Athelas Ensemble, The Symphony Orchestra of Aalborg, big bands and various small ensembles and orchestras.

I participated in the workshop “The Third Way” with various classical composers as inspirators (Per Nørgaard, Hans Abrahamsen, Karsten Fundal among others) and I finished my two year studies of composition at the Conservatory of Rythmic Music where Bob Brookmeyer og Svend Hvidtfeldt Nielsen were my main teachers.

From 2003 to 2010 I have been composing and have released 2 cds as a leader with my 8-piece orchestra, Heartbeats. A big part of the music was composed and produced at the Kæv Studio.

During the years I also have composed music for my duo with Carsten Dahl. We have released two cds: ”Lys på himlen” and ”Det gyldne Landskab”. Furthermore I have composed for the Dahl/Lundgaard/Riel/Dahl and Dahl/Danielsson/Mazur/Dahl quartets.

In the last five years I have been touring and composing with my trio which during the first few years consisted of myself, Jesper Lundgaard (b) og Morten Lund (dr). In 2010 we released our first cd on Storyville Records to critical acclaim.

My trio now consists of Jesper Lundgaard (b) and Espen Laub von Lillienskjold (dr). Lately Niclas Knudsen (g) has been joining us and has been adding new colors and dimensions to the music.

I am contantly searching for a greater freedom of expression and new challenges as a composer. It is important to me that the music I compose is creating a frame of freedom. My vision is to challenge and develop new expressions in my music as well as to create new musical sounds.

My music is through-composed to start with but leaves room for interpretation. The harmonic freedom offers us an incredible opportunity to develop thematic structures while at the same time giving each voice a strong independant personal character while still ending in a common musical expression.

Here is a painting of me, done by the Danish painter Christian Hansen: 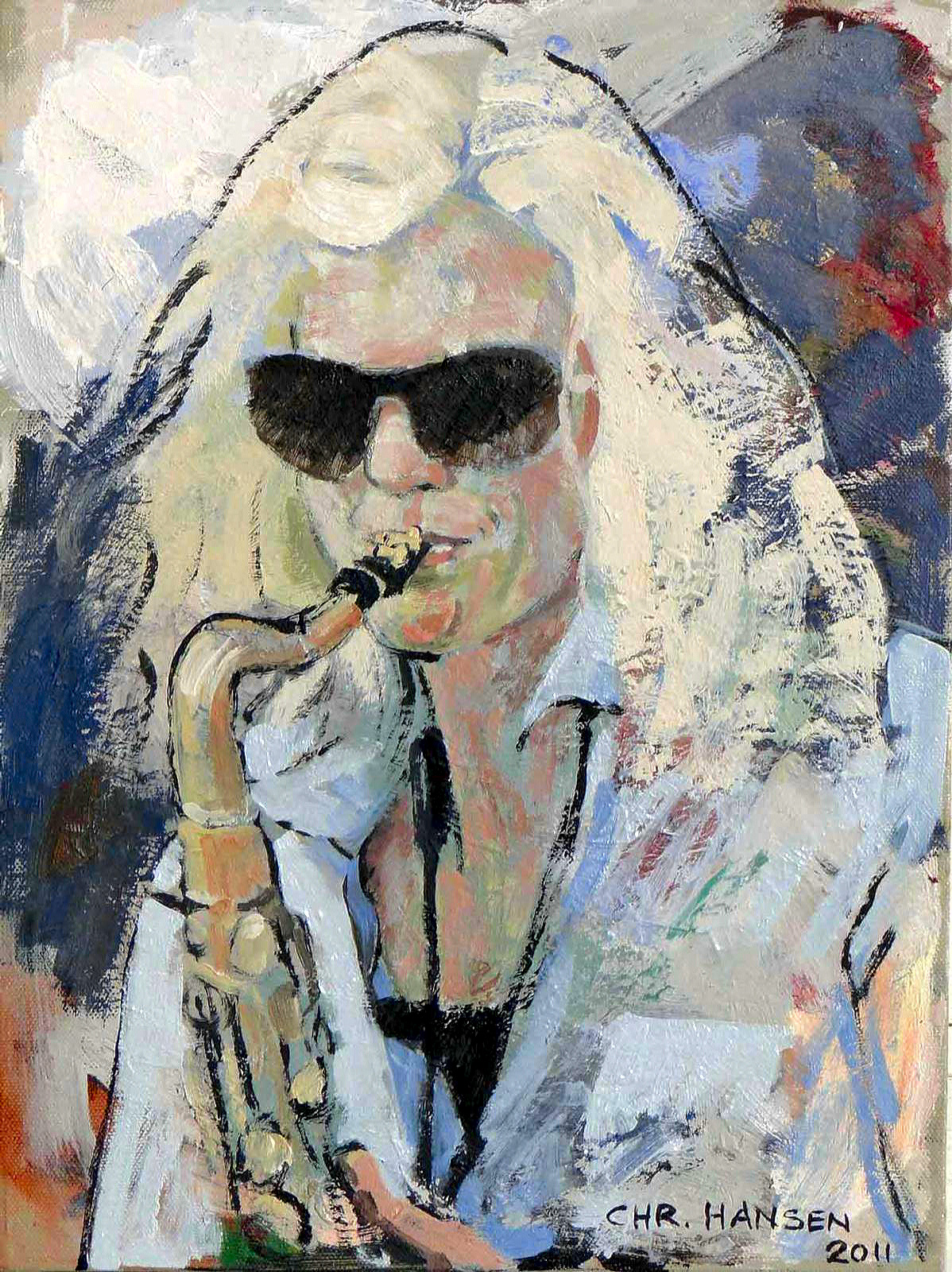 Institute of Musicology at the University of Copenhagen, 1988

The Conservatory of Rythmic Music, 1992

Studies of composition at the The Conservatory og Rythmic Music, 1996 – 1998 with Bob Brookmeyer a.o.

Through the years I have among others played with:

I have played larger jazz festivals. Among others:

As a soloist I have been performing with among others The Finnish Radio Orchestra, Tip Toe Big Band and The Danish Radio Concert Orchestra.

I have furthermore performed in plays with The Orchestra, dancers and actors in European Ran.

Second prize at the Europe International Jazz Contest i Belgium 1994 with The Christina Nielsen Quintet and the award for the best arrangemet of an original by a Belgian composer.

TEACHING
I have taught at:

Sophisticated Ladies: “To you”

Christina Nielsen: “From this Time Forward”, 1995

Christina Nielsen: “A Touch of Happiness”, 1999

My quartet consist of the guitarist Niclas Knudsen who with his enormous musical personality plays with abandon and a freely expressed lyricism, Jesper Lundgaard who is internationally renowned for his virtuoso bass playing and Espen Laub von Lilienskjold who is a superbly talented drummer who adds dynamicism and a dedicated energy to the music.

Christina Dahl is one of the most respected Danish saxophone players. She is a band leader and composes music for small and large ensembles. She has performed in countless constellations and is known by her unique soul-tingled sound and her lyrical interpretations that go straight to the heart.

Her playing varies from the most intimate and understated to the the explosive.

Jesper Lundgaard is one of the most respected Danish bass players in Denmark and abroad. He has toured all over the world with virtually all the big names in jazz – among others with Michel Petrucciani, John Scofield, Thad Jones, Benny Carter, Ed Thigpen, Tommy Flanagan, Dexter Gordon and Svend Asmussen. He has played on more than 500 records – of which he has been a producer of 50.

Espen Laub von Lilienskjold on drums is one of the most talented musicians in Denmark at the present. His playfulness and special way of complementing the totality of the music helps to create a totally unique expression. His playing is refined, dynamic and always extremely musical.

Niclas Knudsen is without any doubt one of the best guitarists in Denmark. He plays within several genres and has a fantastic capacity for melodic expression and a unique and varied way of coloring his sound. Apart from working with his own projects, like Ibrahim Electric etc, he has, among others, played with Adam Nussbaum, Tom Jones, John Tchicai, Dave Liebman, Ray Anderson and Billy Preston.

Every musician within the quartet has the role of being a lead soloist in a united playful free musical communication with great personal originality. The quartet plays with a freedom and dynacism that results in music of a playful and airy quality. The repertoire consist of original compositions by Christina Dahl. Within these compositions lie stories that have symbolic meaning compared to life and it’s richness of all colors.

Her latest CD is from 2014, entitled Life’s Carousel. It is the 8th cd with Christina Dahl as a leader. Jesper Lundgaard has received the Danish award Bent Jædigs Hæderspris in 2010. Christina Dahl received the same in 2010. She has also received an award from the Composer’s Union DJBFA in 2011 and the award Walther Klæbels Mindelegat in 2012.

Lately the quartet har played a number of exclusive concerts in Denmark, Sweden and Norway. Their music har been received with an overwhelmingly positive feedback: Henrik Jöhnemark from Jazz i Malmø writes on Facebook: ”Thanks for a fantastical concert!”. Pjotr Egholm from Giant Steps writes: Great concert! The best concert I’ve been to in a long time!”.

Kjeld Lauritsen writes: ”Wonderful concert with Christina Dahl and her orchestra. Extremely jazzy, even the ”free” compositions showed all the signs of a long life lived with the experience of this mode of expression”.

Bengt Asplund from Floda: ”Thank you so much for the incredible music in Floda yesterday evening. What a lovely tone and technique and what flow and great band playing. The best I’ve heard in a long while – maybe the best I’ve ever heard?”.

Svend Bjerstedt in Kristianstadsbladet: “Beautiful and pleasant. This is jazz that never succumbs to being showy, based on the old and tried standard repertoire, or a swing party or full of cliché filled gestures! Here stories are told of personal involvment, new stories with considerable spirituality and sensuousness and with a great openess to lyrical changes of mood. It’s beautiful and well played together. The music captures you with its seriouness and empathy. The playing together is very alert, the arrangments rich and the solos spiky. Dahl has a mature full blown tone in her tenor sax and a real authority in the whole register. Niclas Knudsen is a very sound-conscious electric guitar player, Jesper Lundgaard is phenomal at making the contra bass sing with a clean, sonorous tones. The drummer Espen Laub von Lillienskjold excells at quiet brush cascades”.

In this musical meeting, a unique expression is created in harmony by three dynamic and creative musicians.

Dahl Toldam Bruun Trio contains three artists, each one with great personality, who together creates an original universe of compositional music and improvisation. The trio is not afraid of experimenting with the musical expression and to seek out the nooks and crannies of the musical landscape.

The music has a spectrum of sound facets and expresses itself from the simple lyrical to the more complex layers of musical lines and puls. The trio thrives in its span and adventurous stories are told and put to life in this musical toneunivers that is intuitively conveyed and ranges from deep, inner peace to chaos and wildness – clear, beautiful moments to smoldering, intens and whimsical colors of foggy tonelanguage.

The music is composed by Christina and is created from inner pictures and storylines. The music is portrayed by the trio in a mutual, organic, musical image that reflects the eternal dynamics and changeability of the human and life.

The trio is set to record their first release together in december 2020, which will be released in 2021. 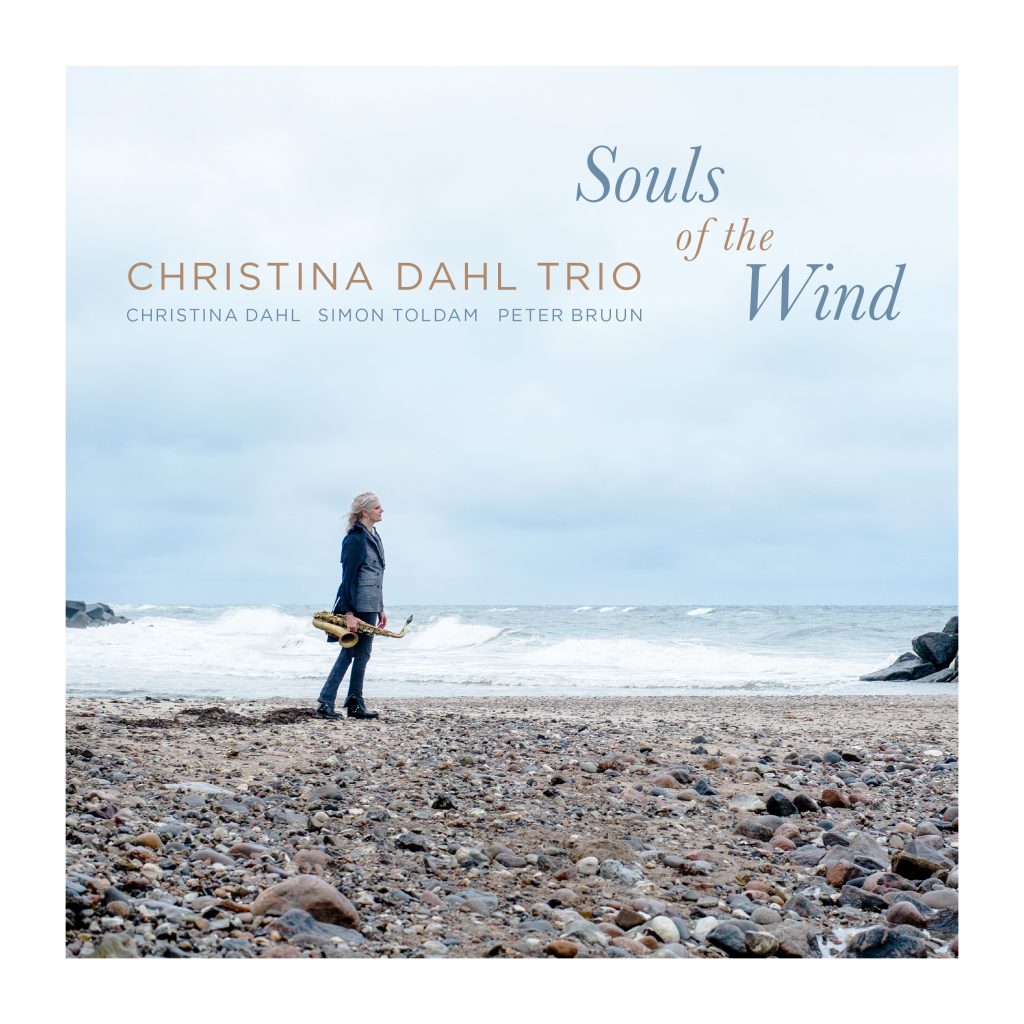 I am so thrilled and thankful to release my trio album “Souls of the Wind” with Simon Toldam & Peter Bruun on Zack´s Music.

You can find the album on the this link: https://lnk.to/_souls/

Moving Moments, my original dance performance show, will be performed live in Copenhagen at Krudttønden, the 4. of july 2016, during the Copenhagen Jazzfestival.

During the Copenhagen Jazz Festival in 2015, in collaboration with Krudttønden, I succeded in realizing my big dream of creatinf a show that embraces the three sensous elements: light (the visual), movement (dance) and sound (the music). I’ve titled the show Moving Moments.

Movable and moving dynamics and energies in a composed and improvised expression that depends on the moment.

In this meeting between the dance and the music a togetherness is created that embraces and reflects Life and turns it into it a sensual experience.

The sensous energies are uttered in a room of the moment that is depending on the human expression and the ability to turn it into a collected experience.
The Moment takes off in stories and music by Christina Dahl.

Alexandre Bourdat has created the choreography for the performance.
Sensual, simple and airy. Wild, crazy and chaotic. It is a moment that is created in togetherness by the light, the dance and the music.

It is a great joy that the venue Krudttønden has created the opportunity to realize the dream of this meeting.

The performance is supported by the Beckett Foundation, Dansk Kapelmesterforening and the collected Gramex funds.

I have a dream of developing the Moving Moments show so that it can be performed at more places and maybe for longer periods – cultural community houses, concert venues, theaters, institutions or business venues, to pass on a message about sharpening the senses, realize the energies between us, develop the communication and create more empathy, consciousness and understanding of human relations on the basis and acceptance of who we are. 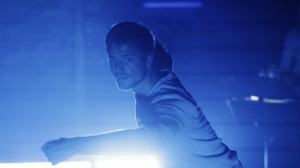 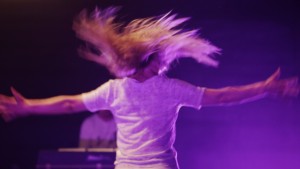